Zoë Gough and Dave Levins met while working in a Dublin music store and quickly began to writing their own songs. However, they soon realised that, in order to move in the creative direction they wanted to pursue, there was a piece missing. Meanwhile, Sam Oyeniyi was working in the same store and looking for a musical project that felt right. Sam was passionate about drums and percussion, and interested in experimenting with electronic textures. When the three members got together for the first time, the chemistry was instantaneous. After a period of hard work creating sonic textures, deep grooves and pop-infused hooks, the band began performing live, honing their craft onstage and off, and refining a sound that has since become the Dreaming Of Jupiter signature.

In early 2018, Dreaming Of Jupiter released ‘Right Kind Of Love’, an upbeat anthem written in support of the rights of the LGBTQ community and to promote equality and love. Clash Magazine wrote that “the rising trio has a soulful sound, one matched to effervescent pop and an ability to side-step trends”. The band quickly followed that up with the release of their debut EP ‘Fading’. Hot Press stated that Dreaming of Jupiter had “exploded in a way most bands can only dream of in such a short space of time – and it is very clear to see why.” ‘Beyond A Vibe’, the band’s first single of the year, creatively captures the anticipation and excitement that arises when moving into a new decade. New sounds, new feelings and new VIBES! ‘High Up’, the second single of the year, is an upbeat, contemporary summer tune with a mean groove, catchy hooks and a positive, high energy chorus that expresses longing and anticipation for things we took for granted to return.

“We are three individuals from different genders, ethnic backgrounds and sexual orientations who have become a family called Dreaming Of Jupiter. We grew up in the same place, but a very different place, at the same time. We believe in respect, unity and love above all else. We say fuck polarisation, fuck discrimination and fuck walls to divide people. We are stronger together. This is our story.” 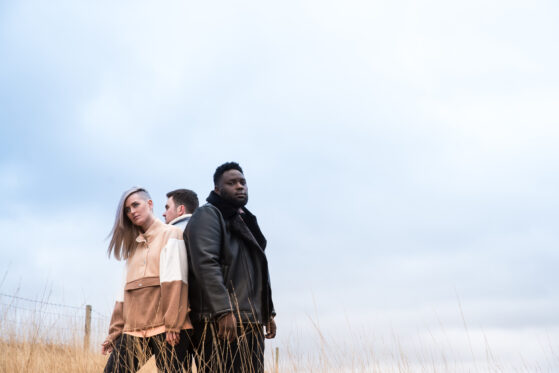